Although many believe the first brewing to be done was at the hands of the Sumerians, there have been ancient Chinese recipes found for a brew created with rice, honey, and fruit that are approximately 9,000 years old.

About 5,000 years ago, the Sumerians of Ancient Mesopotamia left behind their own evidence of beer production. Archaeologists uncovered ceramic vessels from around 3400 BC that had beer residue inside and carried inscriptions of the "Hymn to Ninkasi", the Sumerian Goddess of Beer. Eventually, the Sumerians were conquered by the Babylonians who adopted their superior beer making knowledge.

The beer culture of the Sumerians made its way to Egypt and became a staple of their culture. Beer was much purer than the water at that time and became the everyday drink of the Egyptians. There is mention of many various types of beer in Ancient Egyptian texts such as sweet beer, thick beer, friend's beer, beer of the protector, and beer of eternity. Brews ranged from the everyday to beers meant for special occasions and ceremonies only. For example, there was the beer that does not sour for funerary purposes and the guards of the shrine of Osiris drank the beer of truth.

Massive breweries were built in Egypt and laborers were often paid with beer and grain. It is noteworthy that the brewing and selling of beer was predominately handled by women.

Eventually the Greeks came along and they preferred wine to beer. They looked down at beer as the drink of their conquered rivals and enemies. Even after Alexander the Great took control of Egypt in 332 bce, mass brewing continued but was taxed. It continued to be so throughout the reign of the Ptolemy family until the death of Cleopatra in 31 bce. As Egypt became a province of Rome, the Romans like the Greeks preferred wine to beer. But as the Romans crossed the mountains to expand their empire, they found strong and fierce people on the other side who were often ready to fight and were fortified by beer. From the Gauls to the Spaniards to the Celts, beer was an integral part of their culture.

During the 500 years of the Dark Ages, brewing continued at the same pace by monks within their monasteries. Eventually Europeans began moving beer production into larger locations with malting facilities, mashing vessels, fermentation areas, and trained workers. Some of the beer was flavored with herbs called gruit and in other blended hops were used. In 820, the monks of St. Gallen in Switzerland built the first full-scale brewing operation and facility that was impressive enough to be recognized by any modern brewer today.

In the early 1100's, St. Hildegard (Hildegard of Bingen) established the Benedictine nunnery of Rupertsberg near the town of Bingen on the Rhine River. It was a there that she wrote wrote many books including the Physica Sacra. In that work she explained how the hop was a very useful plant for maintaining good physical health and preserving a great many drinks. The hop became more and more popular in brewing beer and Germany grew into the leading brew center of the world by the mid 1300's. During the 30 Years War (1618-1648), brewing temporarily moved back into the homes but made a robust return during the 1700's.

In Britain it took some time for hops to arrive. As the Normans assimilated to British culture around 1066, the upper echelons began brewing beer for the thirsty masses while their upper class still preferred wine to beer. Brewing during that time was a cottage industry that was once again managed mostly by women. By the 1200's, an Assize of Bread and Ale was put into law which regulated the price and quality of both items. It was essentially an early licensing system and the records kept of old fines can be traced to British brewing families from several generations back.

Brewing was once a household skill expected of all midieval women and those who excelled at this craft were called alewives. Some alewives were allowed to open ale houses for profit and independence. After the Black Plague struck England (1348-1350) and the demand for ale rose, men and the impending demand of commerce conspired against women and wrestled away the brew kettle from their hands.

As hopped beer spread throughout Europe, it was quickly realized that beer could be kept longer. It could now be produced in larger quantities and stored instead of needing to be consumed within a few days of being produced. Slowly but surely, as men had more money to invest in larger brewing operations, they forced alewives out of their businesses and made them work as laborers of they wanted to remain involved in the industry. By the mid 1500's, British beer was largely hopped and being produced in much greater quantities.

After the pilgrims landed the Mayflower in 1620, they quickly began their European-style brewing as they settled in. By 1670 , the English Quaker John Fenwich arrived to Salem, New Jersey and noted that fellow settlers "Straight away busied themselves in erecting breweries for manufacturing beer for common drink." As colonial cities grew during the 1700's, so did the breweries. While brewing many of the same beers found in England, colonials integrated barley malt, wheat, corn, peas, and other spices.

In the meantime, the Industrial Revolution in England was growing and gave rise to the modern brewing industry. Brewed from malt, heavily hopped, and matured for months, Porter beer lasted well enough for the distribution to London's thousands of pubs. English brewers passionately searched for new technology to advance brewing and in 1784, Henry Goodwin along with Samuel Whitbread installed a coal-fired steam engine to mass produce pale malts. Soon, Porter abstained from inefficient brown malts, productivity increased, and India Pale Ales (which could survive long journeys) were created and shipped to the British in Calcutta, India in high volumes.

Bavarian brewers followed suit by stealing the industrial secrets of pale malting technology from the British and then dominated the world of brewing.  To avoid spoiled beer, summer brewing had been forbidden. Brewers inadvertently created "lager" yeast which derives from the German word "lagen" which means to store while brewing underground in caves where they hauled ice. They discovered that lager was able to ferment at low temperatures and after months of aging they had a beer that would outlast most others. Around 1840, John Wagner brought this yeast with him to Philadelphia and began brewing it in a hut next to his house.

Back in Bavaria, in 1841,  the first light amber beers emerged from the Spaten Brewery in Munich and from Anton Dreher's brewery Vienna. In 1843, Josef Groll who brewed in the Bohemian city of Plzen, produced the first golden lager which was called Pilsner. Soon this new brew was spreading all over the place by train. As industrial glass was produced, the beautiful, sparkling, gold brew became even more appealing and popular. England and Ireland stood firm against this change as did the Rhineland with it's Kölsch and altbier. Belgium also maintained the hold of their ancient brewing styles.

In both Europe and the U.S., breweries boomed and built great empires of commerce throughout the 1800's. England's wealth grew on the sale of ale while Central Europe, Scandinavia, and the U.S. built their fortunes in lager.

During the prohibition from 1920-1933, beer production changed with the "Noble Experiment" of using rice and corn to replace malt. After brewing made it's post prohibition comeback, American breweries found their pulse and beer was different now. It was mass produced and possessed far less flavor than it's great ancestors did.

When Americans began traveling abroad however, their passion for beer with rich flavors and finishes was again rekindled. Throughout the 1970's-1980's England developed it's microbreweries and then the Americans once again followed suit. With great inspiration from European traditions, American craft brewers have been set upon the path of brewing enlightenment and provide us to this day with an ever evolving symphony of passion, creativity, and beer. 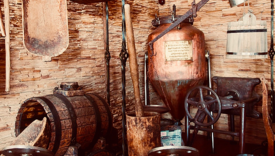 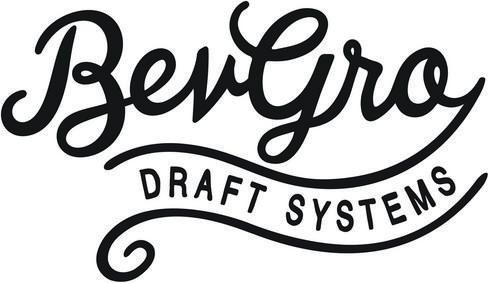 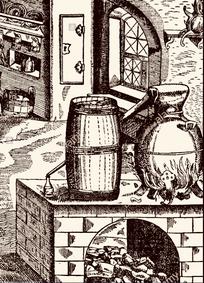 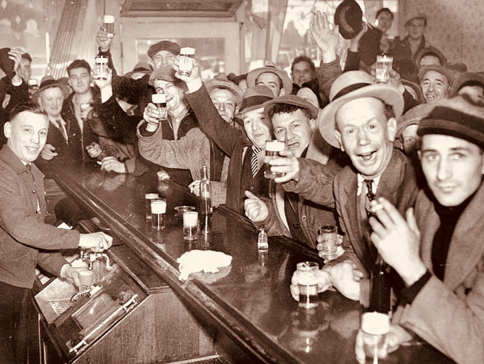 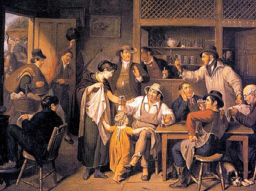 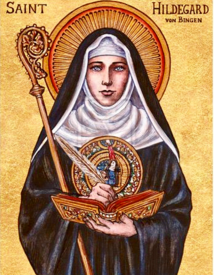 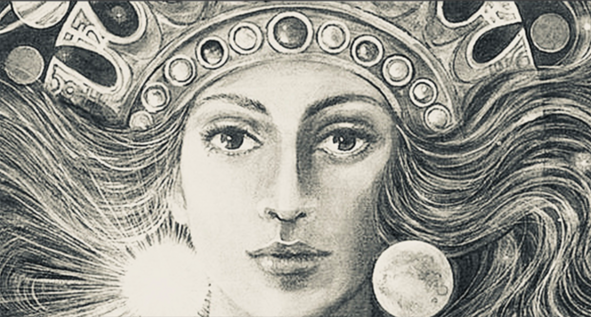 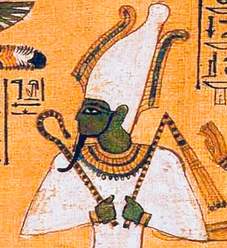 Notorious Alewife in Oxford during the mid 18th century 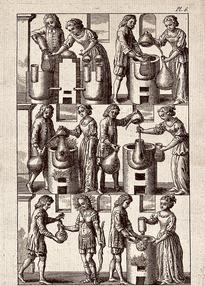 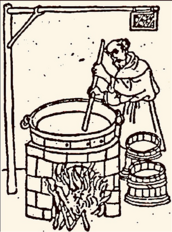 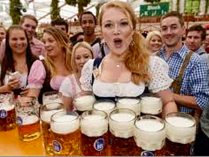 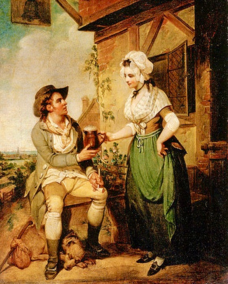 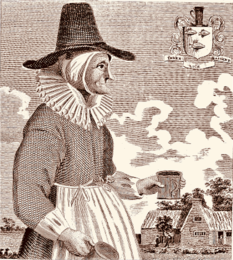 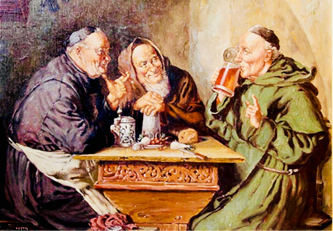 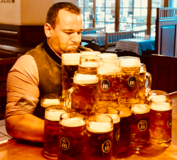